Posted on February 18, by

These interviews aim to highlight brilliant members of our community and spread their knowledge to ignite some Fuses.

Each interview will consist the same three, initial questions, and the fourth, final question will specifically pertain to a project they are currently working on.

Ken Sonkin is a wonderful friend of Fuse Theatre. He has a diverse background of skills from clowning to musical theatre to magic. He teaches at the University of San Francisco. He is currently working on a production of Billy Elliot The Musical with Berkeley Playhouse playing Billy’s father.

“That is a tough one. I have received so much over the years from many different theatre artists: actors, directors, teachers. And it is difficult to say what is the best. I know what I have given to students or other actors I have directed. Two things come to mind.

I think for me in stagecraft, or even in acting that I have tried to impart to actors, students, designers, technicians and other directors over the years and what I believe in is really how to live truthfully under imaginary circumstances. I teach an advanced class ‘Personal Clown Technique’ which is basically how to develop an extreme character that is truthful and is based on a facet of your own personality taken to an extreme. I start the class with the philosophy that we as children naturally know how to make believe. You don’t have to think about it, it isn’t an intellectual exercise. Making believe gets harder and harder to do especially now in the 21st century with all the technology. It starts with being connected to one another which is a lot harder to do nowadays. The key is being open and available to that childlike desire of make believe.”

That completely makes sense. Sometimes it is hard to let inhibitions go let a character embrace that truth.

“Sure. I started the Personal clown class because I had lots of physical skills as young actor. Circus, mime, magic, and clowning and gymnastics and dance. But I combined it with what believed as an actor; to be truthful. How to play an objective, play an action. Frankly, it’s a lot fun this class, but the theories I believe are practical to basically any form of theatre or acting. I encourage people to play.”

This area represents the world. A microcosm because anything and everything you would like, is here. It is a smorgasbord of culture, people, and diversity. We are talking about history, food, architecture, religion, sports, politics. Everything you can think of is in the Bay Area. In fact, of the places I have been in this country maybe New York comes second, but New York has other challenges that San Francisco Bay Area doesn’t have that I prefer.

There is no question I would choose here, its why I made it my home for the past 30 years. The Bay Area is known internationally for being a hot bed, an incubator for new works. I think that that speaks to the acceptance and the tolerance that we have as community in the Bay Area. Certainly, the Bay Area theatre scene is one of inclusiveness. I am making all these new friends right now at this theatre I have never worked at before at the Berkeley Playhouse. It goes without saying that everybody is in this together. I tell my acting students that I hope they will stay here because we need more funky, cool, smart, diligent artists because that is what we are known for.  We are strong willed, we are creative, we are intelligent and we are not afraid to take risks. I think that the San Francisco Bay Area is one of those communities that unlike other areas that I know, we embrace risk.

Doing this play in Berkeley, and I live in San Francisco, so I commute every night. Every time I come back over the Bay Bridge, I remember the first time I saw the San Francisco sky line when I came out here to go to the American Conservatory Theatre for graduate school. And I remember being 22 years old and getting teared up at how beautiful the city is. This project all these years later in Berkeley, it just reminds me how much I love the Bay Area and how much I love the theatre community here.  It’s not perfect, but it is everything I hope for.”

“Working on this play right now, I am very much inspired by my mother and my father. I hear quite a lot of my father’s voice in this character for many different reasons. I draw a lot of inspiration for this character, the father in Billy Elliot, from my Dad.

I hear my mom’s voice inside my head quite a bit which also inspires me in this particular play. I am constantly inspired by my wife, my best friend who I hear her voice in my head all the time about choices that I make, and things to consider or think about. Those are the ones that first come to mind.

The other voices that inspire me tend to be ghosts from the past. My acting mentors like Allen Fletcher and William Ball who were the founders of ACT. I have a dear friend Jim Tompkins who was one of my instructors in undergraduate school. I hear things that he told me in my head. I try to carry them on.

Other than that I love Elizabeth Warren. She is a politician and yet she inspires me. I was a big Bernie supporter.

I teach it and I believe it, inspiration can come from anywhere. As artists we have to be open and available to whatever because we don’t know where that inspiration is going to come from. I love going to art museums, I get inspired for acting and directing by looking at photographs, sculptures or paintings. I love listening to different kinds of music. I can be inspired by a montage of photographs based on the research I have done from faces to locations to historical facts and figures. Inspiration can come to us whenever, wherever and it is different for every project.

I know actors who use the same formula every time they are acting. Then they wonder why maybe they aren’t as inspired. I never know where inspiration will come from. I believe in the funneling affect. I do my research. Open myself up to whatever else is there, and hopefully it funnels down into something I can use while working on a play. ”

“My first reaction to what lights my fuse? I haven’t acted on stage for about five or six years. I am mostly a regional theatre director. I direct 3 or 4 plays a year. I am also a professor at USF. So I teach acting. So I am constantly involved in theatre and frankly, usually in a position of leadership when I teach or direct.

So what lit my fuse this time, was first, it scared the hell out of me to get back on stage! I was nervous, especially about singing because I haven’t sung on stage for quite a while. As an artist, it’s good to scared, it’s good to be challenged. You never want to get too comfortable or repeat yourself.

The second thing is that I love this story. My wife and I had just finished watching the original film a month ago before I joined the cast. We love this movie. This is one of those special small stories, set during the 1984/85 coal miner strike in the North of England in this small coastal village. It is actually based on a true story based on an opera singer. This little boy grew up and showed promise for becoming a world famous opera star. So when the writers of the film caught wind of this, they said we want to make it into a movie and they changed it to a little boy who showed potential to become a ballet dancer.

The ultimate message about this story is really and truly about following one’s dreams. I don’t care if your dream is to become a ditch digger, this story is about overcoming odds because you have a right to try and become the best you can be.

It resonates with me because anybody who decides to go into this field of being a professional artist is faced with that challenge. We know it is a difficult profession.

The second thing is that this little boy who becomes a ballet dancer does not have the support of his family. His mother is dead and his father doesn’t understand his dancing. He is angered by why anyone want to go into the arts. He is a working class, blue collar man who is frankly struggling to keep food on the table. With his mother dead and without that feminine or female energy in his life, the father is kind of lost because he is trying to raise this little boy as well as an older brother.

So what lights my fuse is that it is a compelling story. It is a human story. It is terribly human. And it is a joyous story.

It is not even a perfect ending. Billy does get to go on his journey. The father and brother on the other hand have to go back into the coal mines because the strike ends. It is very sad that they have lost out on their union labor efforts. It is a bittersweet story in that way, but the fact is that this little boy has a community that comes together to give him the money to go for an audition at the Royal Ballet School. Once the father finally realizes he has a chance to give his son a chance at happiness, a chance at fulfilling his dream, it is beautiful. It is lovely. It is a funny story. It is a poignant story.

For all those reasons, it lights my fuse. Every single time I go to rehearsal, every time I have been working on this, I am constantly inspired by this wonderful story. ”

It is a truly beautiful story, but also one produced many times again. Why produce the story again?

I also just want to say the other actors that I am performing with are just phenomenal.

I don’t have another production to compare this cast to, I just know my own high standards of theatre. Taylor Bartolucci is playing Mrs. Wilkinson and she is just fantastic, just spectacular. She is the ballet teacher and she is just magnificent. The young many playing my older son Zach Padlo is a fabulous actor, singer and dancer. And the two Billys, we have two boys playing Billy Elliot who are amazing! Those two Billys, Parker and Matthew, both performed the role nationally so it is quite exciting. They both happen to be from the Bay Area. It was quite happenstance that they were both available so they are doubling the role every other performance. I am impressed every single day with both of them with not only their dancing ability which is just magical, but what compassionate little boys they are with their acting, their singing, how they are on stage.

I have to mention the director Kimberly Dooley who is wonderful. She has surrounded herself with a fantastic design team, choreographers, musical directors, and dialogue coach and many others. It is a great collision of great artists coming together. The show will be at the history Julia Morgan Theater at Berkeley which houses the Berkeley Playhouse. I can’t imagine a better way to see this magical story, hearing great music, and seeing magnificent dancing. ” 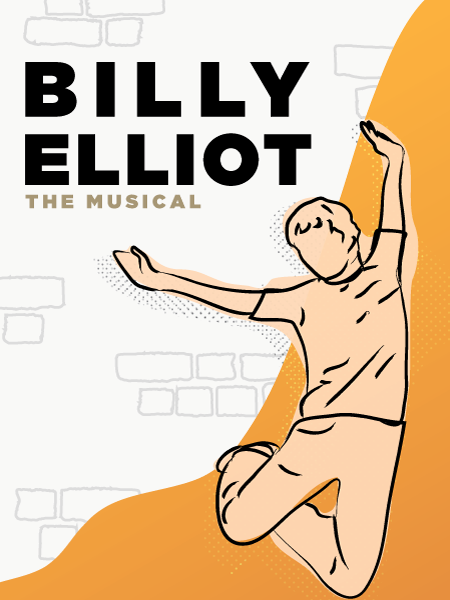